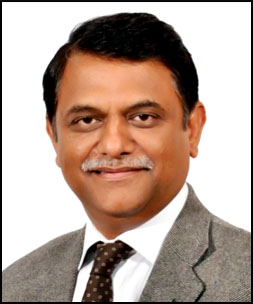 Shri Arvind Kumar is a graduate in Economics and a post-graduate in management (MBA) from the Indian Institute of Management, Ahmedabad (IIMA). He completed a Masters in Public Policy (MPP) from Woodrow Wilson School (WWS), Princeton University, USA as Robert McNamara Scholar, and a course on Leadership & Globalization from LSE London, UK as a Chevening Scholar. He has been in the Indian Administrative Service (IAS) since 1991 and has worked in various capacities at the State level for over two decades which include, inter alia, carrying out all development and welfare work, on behalf of the State Government in two Districts and as the municipal city CEO in two cities.

From 2009-2014, Shri Kumar worked with the Government of India as Joint Secretary in the Ministry of Finance where he managed insurance and pension reforms, institutional finance including housing, MSME, microfinance, agriculture & rural credit. Shri Kumar has been a Government nominee Director on the Boards of National Bank for Agriculture and Rural Development (NABARD), ICICI Bank Ltd, the New India Assurance Company Limited (NIACL), Small Industries Development Bank of India (SIDBI), IFCI Ltd and National Housing Bank (NHB) and IRDA among others during this period.

Shri Kumar moved back to the State Government of Telangana in January, 2015 as the Principal Secretary, Industries and Commerce, and Energy Departments. The New Industrial Policy was launched by the State in June, 2015.

Shri Kumar is presently working as the Principal Secretary, Municipal Administration and Urban Development, and Commissioner, Information and Public Relations Departments of the Government of Telangana.