| Screen Reader | Skip to content |
Menu
You Are Here: Home → Hon’ble Governor Dr. Tamilisai Soundararajan makes a presentation on Tribal Development and Health at the 51st Conference of Governors and Lt. Governors at Rashtrapati Bhavan.

Hon’ble Governor Dr. Tamilisai Soundararajan makes a presentation on Tribal Development and Health at the 51st Conference of Governors and Lt. Governors at Rashtrapati Bhavan.

Governor Dr. Tamilisai Soundararajan has made a presentation on tribal development and health at the 51st Conference of the Governors and Lt. Governors, chaired by Hon’ble President of India Shri Ram Nath Kovind, at the Rashtrapati Bhavan in New Delhi on Thursday.

The Governor during her presentation has highlighted the Pilot Study and Project, initiated by her in Adilabad, Bhadradri-Kothagudem, and Nagarkurnool districts in Telangana State.

The pilot study launched in association with the prestigious central institutes like the National Institute of Nutrition (NIN), Hyderabad, and ESIC Medical College, Hyderabad, the Indian Red Cross Society, Telangana State branch, and other universities is aimed at studying the malnutrition issues and other vulnerabilities among the people belonging to the Primitive Tribal Groups in the identified districts of the State.

As part of the initiative, a need-based nutritional improvement and livelihoods improvement pilot project will be implemented soon through a multi-pronged approach.

During the presentation, the Governor also elaborated on different initiatives from the Raj Bhavan, Telangana, and Raj Nivas in Puducherry, where she is holding the charge as the Lt. Governor, to reach out to the people during the COVID-19 pandemic times.

The initiative to dispel vaccine-hesitancy among the people in general and tribal women in particular was also mentioned during the presentation.

Dr. Tamilisai Soundararajan’s special efforts in ensuring the accessibility of online education to the students belonging to the underprivileged sections and initiatives to improve quality of education in universities were also highlighted during her presentation.

The initiatives like Chancellor Connects Alumni and efforts to promote awareness and implementation of the National Education Policy-2020 were also formed part of the presentation.

The Governor said that it was a great opportunity to make a presentation at the prestigious event like the 51st Conference of the Governors and the Lt. Governors of the country at the Rashtrapati Bhavan. 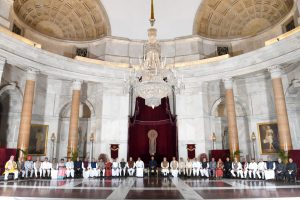 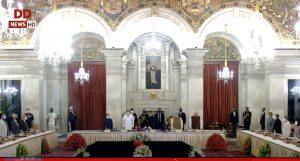