Governor Dr. Tamilisai Soundararajan on Thursday called for special focus on health and education of the people belonging to the primitive tribal groups.

She stated that it was important to carry out sustained efforts to ensure improvement in the nutritional status and promote education among the primitive tribal groups’ people.

The Governor was reviewing the progress on the nutritional intervention initiative taken up to improve the nutritional status of the primitive tribal groups’ people in select tribal habitations of three districts-Adilabad, Nagarkurnool, and Bhadradri Kothagudem districts- at Raj Bhavan, here.

Dr. Tamilisai Soundararajan also emphasized on the promotion of hygiene among the tribal people so as to ensure their better health.

“We have launched different initiatives with an objective to ensure their all-round development, but I would emphasise on the time-bound action plan and implementation to get some tangible results,” she added.

Highlighting the need to improve the tribal peoples’ livelihoods and ensure their economic prosperity, the Governor asked the agricultural, veterinary, and horticultural universities in the State to train the tribal people in sustainable agricultural practices, animal husbandry, dairy farming, and vegetable cultivation.

Reviewing the nutritional intervention initiative’s progress with the functionaries of the Indian Red Cross Society, National Institute of Nutrition, ESIC Medical College and KNR University of Health Sciences, the agricultural, horticultural, and veterinary universities, and the Centre for Learning and Practicing Law, she called for concerted efforts.

Secretary to Governor K. Surendra Mohan and other senior officials were present. 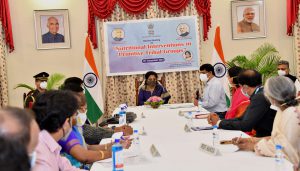 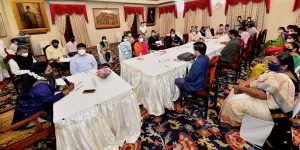