Chief Minister Sri K Chandrashekhar Rao has suggested to farmers to go in for alternative cash crops such as Ground Nut, Cotton, Black Gram, Mung Daal, and Bengal Gram etc., which have demand in the markets instead of the paddy. The CM said it is better to go in and focus on other crops, instead of cultivating only Paddy and try to change the crops pattern in the state. The CM who came to Jogulamba Gadwal district on Thursday made a surprise visit to Rangapur in Pebbair Mandal in Wanaparthy district and William Konda Thanda village Panchayat in Kothakota Mandal and examined the Black Gram, Ground Nut crops cultivated by the farmers. The CM, who at first stopped at Rangapur, walked from the road and visited the land where Black Gram crops being cultivated by farmer Maheswar Reddy. He also examined Groundnut crop cultivated by another farmer Ramulu. From both the farmers the CM elicited information regarding what price both the crops are getting in the markets, how much is the yield, how many times one should water the crops? The farmers told CM that Black gram yield is about 8 to 12 Quintals per acre and the MSP is Rs 6300 per quintal while the market price is above Rs 8000 per quintal. The yield of groundnut is about 10 to 15 Quintals per acre, MSP is Rs 5550 per quintal and the market price is above Rs 7,000 per quintal. They said due to change in the crops, land fertility is increased and led to more yield.  The CM also examined the paddy put for drying on the road in Williamkonda Thanda. He also visited Groundnut Crops cultivated by farmers Gokari Venkataiah. He enquired about the cultivation methods and the yield. He plucked few groundnut plants and examined the nuts. Venkataiah told the CM that due to adequate availability of water and power, the yield has increased. 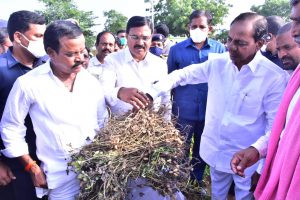 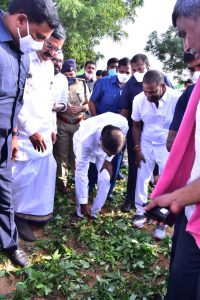 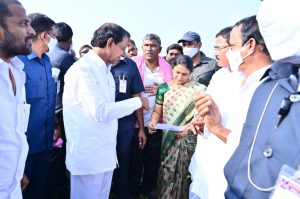